The history of the building

The Reynell Family: The Beginning

According to the Domesday Book of 1086, ‘Wogwile’ (the manors of East & West Ogwell) belonged to the Peytevins (or Pictavensis). The very wealthy local Reynell family married into the Pomeroys, so the Ogwell estates then passed into the hands of the Reynells. At one time they owned most of the land between here and Newton Abbot. 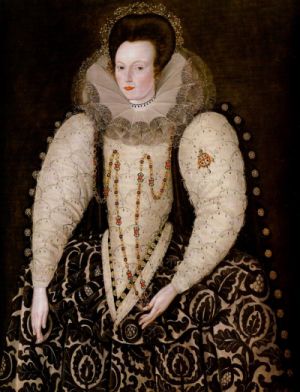 Evidence shows that Thomas Reynell built a house on this site c1588 during the reign of Elizabeth I. His wife, Lady Reynell, is shown (right) in a portrait from circa 1587. If you look outside the Hermitage Wing back door to the courtyard, there is a stone in the wall of the lean-to building opposite with the inscription ‘Anno Domini 1588 T. R.’. Thomas was knighted in 1603 at the Coronation of King James 1st.

The layout of the old part of the building is thought to have been in an E shape – popular in Elizabethan times. There was an East wing, central building and West wing – the east wing has all but disappeared and in its place are far more modern (Georgian) buildings. The west wing was in the area of the current Laundry Room.

The original house was said to be built with the assistance of Spanish prisoners of war and was described as ‘a very fair & genteel structure’.

The flagstone floor in the ground floor corridor is partly made up of pink coloured stone, known as Ogwell Marble, found commonly in this part of Devon. The area and corridor around the present front door are part of the original buildings. In Georgian times and through to the early part of the 1900’s, the front door, with portico, was the set of doors leading into the dining room. The old bell mechanism is still visible but the portico has gone.

The Taylor Family: A Country House 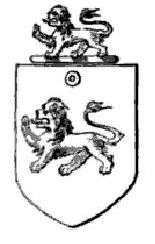 The old manor house had fallen into disrepair and in 1750 Thomas Taylor (heir through marriage to a Reynell, their family crest shown left) began to restore and rebuild the property. It was in 1790 that Pierce-Joseph Taylor finished all the works that had been undertaken on the estate, leaving us with most of the current Georgian style building. The house now had a drawing room (the present walking room) a common room (our lounge) the library and a new staircase with top-light. 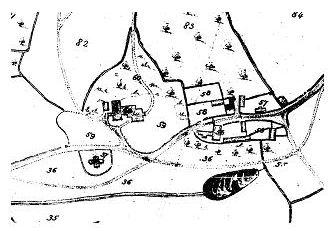 The panelling in the lounge was made of wood from the estate, which in 1890 totalled almost 700 acres including a deer park. Originally, the house had portraits of all the family members adorning the walls.

Major-General Taylor CB lived at West Ogwell House in the early 1800s. He was for some time Lt–Governor of the Royal Military College at Sandhurst. His daughter Anne Frances married Sir Walter Palk Carew, 8th baronet of Haccombe House near Newton Abbot in 1837. A Tithe map of West Ogwell in 1840 (right) shows the house, church, the hamlet and a small cone-shaped lake (no longer there). 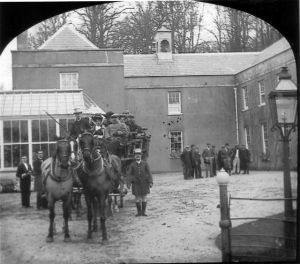 Daniel Robert Scratton from Essex bought the house in late 1869. The Scrattons (left) were wealthy and well loved by the local community. They brought water to the house and supplied it to the village and to East Ogwell. They had a cellar full of fine wines, kept a good kennel of pointers, and were noted cattle breeders. Mrs Scratton, often dressed in red velvet and wearing many diamonds, drove about the parish in a yellow-wheeled barouche carriage. She died in 1901 and when Squire Scratton died in 1902 Ogwell House passed to a cousin. It was then bought by the farmer who lived next door in West Ogwell Barton. He only used the house as a store for his farm produce.

During the First World War the house was bought by the Australian Army (some accounts say it was the New Zealand Army), who divided the rooms up with the intention of making the house into a military hospital and recuperation home. It was never used as such, and after a period when it lay uninhabited, in 1925 it was bought by Brigadier & Mrs Kelly for £2,000, to be used as a Diocesan House, but staff difficulties made it impossible for them to carry on.

A Diocesan Committee was formed to take over the running of the house and it was then used for conferences and retreats. It was at this point that the house became known as a ‘Retreat’ centre. A newspaper report dated March 1938, had the headlines ‘Spiritual Centre of Diocese: Bishop’s Tribute to the Value of West Ogwell House’ and ‘Plea for Greater Financial Assistance’. At the annual meeting of the West Ogwell Retreat House, chaired by the Bishop of Exeter, plans for assisting the financial condition of the house and extending its usefulness were discussed. Retreat numbers were good but income from retreatants was down by £22, added to an increase in the wages bill of £52 resulted in an increase in the adverse balance by £122. ‘The useful work the house was doing would become increasingly difficult to carry on unless they received some considerable donations or increase of income’ reported the Hon. Treasurer: Mr E Cox of Totnes.

Overall the meeting was a great success; the benefits and usefulness of the retreat centre were much appreciated and a further commitment was made to aid in whatever way possible the continued growth of the centre. The house was not open during the winter months. It was probably too expensive to provide heat for guests.

World War Two: The Arrival of a Monastic Order 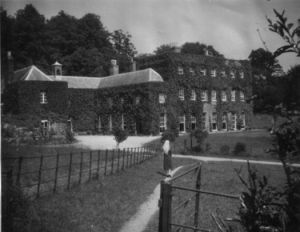 Not long later in 1939, with the possibility of war imminent, the Sister Superior of St. Gabriel’s School, Mill Hill, scoured the West Country in search of suitable premises, should an evacuation of London become necessary.

They took over the house (seen left in 1939; below in the 1930s) making it available as a safe haven for their girls evacuated from London because of the Blitz. In all, some eighty children, with several Sisters and teaching staff descended on West Ogwell. One lady, Brenda Tillotson wrote to us of her experiences at West Ogwell House during the war. She remembers all the rooms being named after Saints or having imaginative names like ‘The Cloud of Witnesses’. The bell would be rung whenever they received an air-raid warning. The girls would grab a blanket and gas-mask and then run to their allotted space on the ground floor for safety. 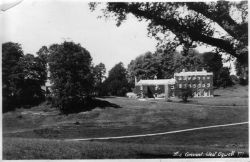 Before Easter each year the Sisters would organise a retreat for the girls. Silence was kept for twenty-four hours when they would read, meditate and go for walks. Every evening the shutters on the windows were closed for black-out regulations thus making it pitch black inside the house!

It was not all girls, however. John Clark wrote to Gaia House from California, his memories recalled after his daughter came to stay with us on retreat:

“I was evacuated along with my sister from St. Gabriel’s school, Mill Hill, when war broke out. The girl’s school took boys until the age of about 7, when they became too ‘aware’ of the fact that girls were built differently – as I found out, during “I’ll show you mine if you show me yours” games, always initiated by the older girls. I was desperately unhappy there, and felt I’d been abandoned by my parents. My mother promised to come back for me the next day if I’d behave like a man and pass the night, just one night. She didn’t return for 2 months – traumatic for a seven year old. I still haven’t forgiven them for that one, although times were desperate for them too. There I was, an enuresis victim and stuck that way for the next 10 years. After one of her retreats with you, my daughter sent me a picture of the Georgian walls which I had stared at while waiting hopelessly for the car to arrive to take me away. It sent shivers down my spine: they haven’t changed at all.” 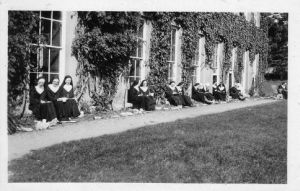 After the children had gone (to another school in Newbury) the remaining Sisters were joined in 1943 by the Sisters of St. Agnes House. The house now became the Convent of the Companions of Jesus the Good Shepherd (CJGS).

Predominantly a teaching community, the sisters (right) were all well educated women, most with degrees from Oxford. They were a high Anglican Christian Order based on the teachings of eminent Oxford scholars such as Kebel, Newman and Pusey. There were plenty of guests, and they organised retreats, but because of the war and the subsequent shortages, the lack of space at Ogwell House wasn’t addressed until the fifties.

The House Assumes its Current Shape

When restrictions were eased, the Sisters then set about adding to the building: Bethaney Wing (Hermitage Wing) was built in 1954 with an extension to it in 1960 (below), the Chapel was built in 1955 and the Nazareth Block (Garden Wing) in 1966/67. Until 1955, the present Walking Room was used as the chapel. Photos of the Dining Room and a nun in the Garden Wing, around 1950. 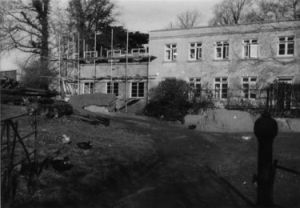 The North (Nazareth) Wing provided much needed work rooms: a studio making CJGS greeting cards, a bakery where Altar Breads were made to supply many churches in the area, and a sewing room to tend to the Sisters’ Habits, where church linen and other goods were produced.

For a while the house was very busy, offering bed spaces to convalescing nuns who had become ill abroad whilst on missionary work, but due to a decline in interest in the order and with limited funds available to support such a big house, it was sold to the Gaia House Trust in 1996.

Gaia House was then in nearby Denbury at the Old Vicarage, and the move to West Ogwell House was greatly welcomed because of the extra space it offered and the opportunity to stay in the same locality. The Sisters were very happy to sell it to us, so it could be continued as a place of spiritual practice and contemplation. Some of the sisters are buried in the grounds here and we have a dutiful and happy obligation to tend their burial space. The sisters still have a right of pedestrian access to the graveyard at all reasonable times by prior arrangement, and can choose to be buried there. It is the wish of the Sisters that the area is not entered except when cutting the grass.

In 1996, after selling West Ogwell House, the Community moved to Windsor to live and work alongside the Community of St John Baptist, although retaining its own ethos. The Community aimed ‘to express in service for others.’ Now, this service includes involvement in lay and ordained local ministry training; offering companionship to those seeking to grow in the spiritual life through spiritual direction, quiet days and retreats; and especially the befriending of the elderly, lonely and those in need. In 2001, the Community moved with CSJB to The Priory, Begbroke.

The Story of Gaia House